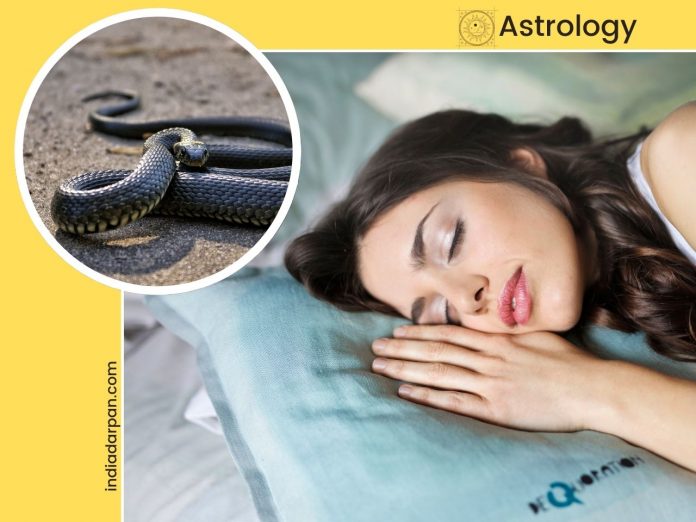 Snakes are one of the most feared and dangerous reptiles in the living organization. The reason for such an image is due to its tendency of being venomous. Thus, if you see a snake in your dreams that might mean something as such it is a venomous and dangerous reptile to encounter.

There are many meanings or stories of getting bitten by a snake in dream such as deceit, spiritual, sex, transformation, and many much more. The stories and mysteries behind the snake bite dreams are numerous, as such it has been interpreted through ancient history as well in modern psychology.

So many might be thinking, what does it mean when you dream of a snake bite? If a person is dreaming about a snake biting you then it may be referred to as a warning dream.

Such dreams are meant to warn you of the coming problems that life will throw at you.

If the person is dreaming about the same snake bites then there might be some deep emotion buried inside your conscious and is trying to get out. The thing is it’s all about details like the location of the snake bite, the emotion that you felt after waking up from a snake bite dream, or the color of the snake that has bitten.

There are numerous cases and numerous amounts of meanings, and it is totally dependent on individual human being to believe on this or not, because in India, there is a bunch of people who deeply believes on dreams.

Various locations of Snake bite in dreams with its meaning:

If you dream about biting a snake on the face in a dream then in that case it symbolizes vanity. As such it showcases an unhealthy relationship between the body and beauty. The person dreaming about this has put more thought on the external beauty of the body rather than the spiritual beauty.

In simpler words, the person dreaming about a snake bite on the face judges the person by its appearance.

Now snake bite on the chest represents the center of energy of your body. As such the body works with the help of the heart as such it is the main organ that keeps the flow of blood continues. Just like that the dream also depicts your relationship with the people around you and with yourself.

Snakebite on the chest also defines that the dreamer has a commitment issue or doesn’t like to open up to people quite easily. While on the other hand, it also represents that you are most likely to get heartache due to your loved ones.

The snake bite on the lips represents betrayal and infidelity. These kinds of dreams usually showcase your deepest and darkest fears. Weather is your partner betraying or slandering your thoughts that have made your life miserable.

Other than that, snake bite on lips also indicates that the dreamer must take care of the words they speak as such it can be hurtful.

A black snake bite in a dream means that it is a bad thing and bad things will start to crawl out of the closet and would make bad things happen. Many people also dream about shiva lingam while sleeping.

Some also believe that after dreaming about a black snake bite new ideas of traveling around may cross their mind and they might get a very good opportunity may cross their path.

Snake bite in a dream meaning in Hindu astrology is believed to be an invitation for the bad incidents while on the other hand, if you catch a snake in a dream then it is considered as a victory over the enemies.

Spiritual meaning of snakebite in a dream:

If the dreamer is dreaming about a snake bite, then it has a certain meaning in the spiritual world, it signifies personal growth, transformation, and renewal. Apart from these it also depicts a presence of a poisonous or toxic element that is hell bend inducing negativity into one’s life.

For some, it also represents power and protection as such a snake has the ability to sense things before happening. It is like a double-sided sword, for some, it is a good luck symbol while on the other hand, some consider it as an entrance of a bad omen.

Seeing a snake in dream or experience a snake bite in dreams can mean many things as such there are numerous theories running in the market. For some it is bad luck, for some, it brings good luck. While for some, it brings a chance to prosper or a good opportunity will soon cross their paths.

All in all, it depends on the lifestyle you are living and if you are stressed about something then the dreams get connected with the real world and make you see things via Snakebite perspective.