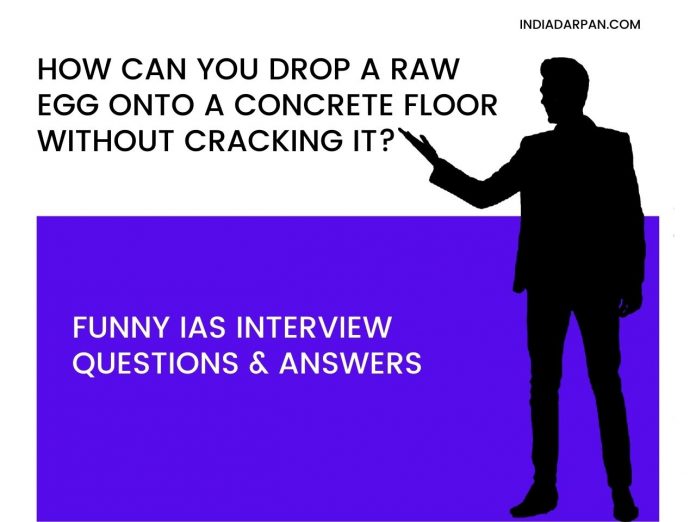 In India, government jobs have significant value because those jobs do not only provide security, but along with it comes a feeling of pride and dignity. Thousands of youngsters every year appear for the UPSC civil service exam so that one day they can see themselves becoming an IAS officer. Everybody who is preparing for this exam knows what kind of struggle they have to face.

Becoming an IAS officer might be your dream, but that goal will require you to go through some of the toughest situations you have ever seen. One of the hardest things about cracking IAS exam is that you will have to go through the toughest interview. Many people have scored good marks in their exams, but they have failed to crack up the interview. If you are worried about the IAS interview, then don’t because sometimes it’s been found that the panel might ask you some funny IAS interview questions also and here’s the example of such questions.

Q1: How can you drop a raw egg onto a concrete floor without cracking it?

Q4: What will you do if I run away with your sister?

Q6: How can you lift an elephant with one hand?

One of the best things about IAS interview is those can be interesting too only if you know how to handle that situation correctly. Many IAS aspirant thinks that they will be asked the most robust type of questions in there, but that’s not true in every case. Sometimes the panel which is going to interview you will ask some interesting and funny questions also to test your logical reasoning and will power.

If you look at those people who have successfully cracked their interviews, then you will find that they had been asked some interesting or funny questions during their conversation. Since you have already cleared the theoretical part of the IAS exams in the interview, your commons sense is what’s going to judge by these people. So here’s the list of interesting questions asked in IAS interview.

Q1:What if one morning you woke up and found that you were pregnant?

Q2: What happened when the wheel was invented?

Q3: Twins (Adarsh and Anupam) were born in May, but their birthday is in June. How’s this possible?

Q4: If two’s company, and three’s a crowd, then what is four and five?

Q5: A cat had three kittens: January, March, and May. What was the mother’s name?

Q6: James bond was pushed out of an airplane without any parachute. He survived. How?

Q7: If it took eight men ten hours to build a wall, how long would it take four men to build it?

Q8: How can a man go eight days without sleep?

Q9: The Bay of Bengal is in which state?

Weird And Tricky Questions Asked in An IAS Interview 2021

Preparing for an IAS interview might look tough, but if you made the preparations correctly, then you won’t face any problems in front of the panel of experts. If we look at the history of IAS interview, then you will find that experts in there ask some tricky and weird questions which will test your knowledge of various things. Now, these questions could be of anything because mostly you would ask about hypothetical situation questions in which the experts would judge your opinion. If you’re a type of person who is a jack of all trades, then you should have a look at these weird and tricky questions asked in an IAS interview.

Q1: If you throw a red stone into the blue sea what it will become?

Q2: A murderer is condemned to death. He has to choose between three rooms. The first is full of raging fires, the second is full of assassins with loaded guns, and the third is full of lions that haven’t eaten in 3 years. Which room is safest for him?

Q3: Can you name three consecutive days without using the words Wednesday, Friday, or Sunday?

Q4: What can you never eat for breakfast?

Q5: Where would Lord Rama have celebrated his “First Diwali”?

One of the best things about preparing for IAS is that you won’t get bored on this journey. Since the first stage and till the interview you will have lots of fun. Generally, an interview panel of IAS is considered as strict because of the way they test the person who wants to become an officer. However, such things don’t happen every time because sometimes you would be asked some funny questions which you will have answer correctly. An IAS aspirant needs to understand that the interview panel consists of human beings, and they would sometimes ask you some funny yet tricky questions to test the level of your intelligence. Here’s the exclusive list of those funny IAS interview questions and answers which are often asked by interviewers.

Q1: Can you name three consecutive days without using the words Wednesday, Friday, or Sunday?

A. Yesterday, Today and Tomorrow.

Q2: What if one morning you woke up & found that you were pregnant.

A: Girl – I will be very excited and take an off, to celebrate with my husband.

Q3: Twins(Adarsh and Anupam) were born in May but their birthday is in June. How’s this possible?

A. May is the name of the town.

Q4: If two’s company, and three’s a crowd, then what is four and five?

So these are some of the best funny questions which are asked during the IAS interview. Most of the times when you’re feeling low or bored while studying for your exams, you should look at these questions which will light up your mood.

All of these quest questions have been taken from other sources and after examining interviews of the IAS candidates. If you liked any of these questions or answers or have any suggestion, then leave a comment down below.