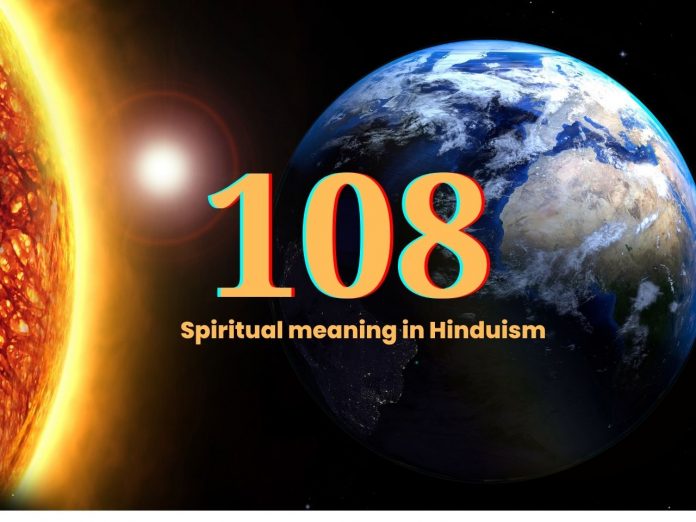 Have you ever wondered why each and everything revolves around the number 108 ? It is because the number 108 is quite hefty and used in various sacred texts as well in various transcripts and has quite a significance in it.

If you see it in retrospect, the number 108 is quite infused with all the known facts and beliefs that we know in the present day. If we talk about the prayers only, it is believed that certain mantras in Hindu mythology must be recited 108 times. By doing so, the power of the mantra enhances and the required ritual is finished.

One would ask, Why is 108 a sacred number in Hinduism? The answer to that is quite simple, there are ‘n’ numbers of proofs that indicate that all modern science and math are extracted from the ancient Vedas. Numerous Vedic sages helped to solve the modern mathematical formulas, for instance, it is cited in ancient Vedic Cosmology that 108 represents creation and all the existing universes.

Spiritual Meaning of 108 in Hindu Religion

So What does 108 mean in Hinduism? Hinduism is quite exquisitely intertwined with spirituality and has quite an interesting take on life. In Hinduism, it is believed that the number 108 denotes the distance between God and our body. It is also believed in Ayurveda that there are 108 marma points or vital points of life force located in our body. Therefore the spiritual meaning of 108 plays an important role, it is advised to chant the mantras at least 108 times as such each chant represents the transition of the material self mind state towards the more refined spiritual mind state.

The significance of 108 in Hinduism can also be seen in the seven chakras that have a specific location on our body and each chakra denotes a certain energy center of our body. The seven chakras start from the top of the head and end at the base of the spine. The heart chakra is the fourth chakra out of seven and it is located at the exact center of the chest, reflecting transformation and love energy. The significance of the heart chakra with the number 108 is that inside the heart chakra there are 108 Nadi or in other words, there are 108 energy lines that perfectly converge with each other and make an ideal energy center.

The significance of 108 in Hinduism can be easily seen, as in the Hindu religion, there are about 108 Upanishads which is a sacred texts about wisdom from the ancient sages. to cite some more, In the Sanskrit language there are 54 letters and each alphabet has a shakti, feminine, masculine, or shiva quality. Therefore if we multiply the 54 alphabets by 2, the answer would be 108.

Due to these phenomena, the Meaning of 108 in Hinduism changes and becomes a significant number. Now let us discuss some of the scientific facts about the number 108 and understand how the world revolves around the number 108.

The clash between the modern scientific answers and mythological answers is eminent, but no definite answer has been surfaced about why there are so many aspects and facts reloving to the number 108. There is some divine energy working behind everything and we as human beings are not capable of seeing them.

Open Network for Digital Commerce (ONDC) – Everything you need to know