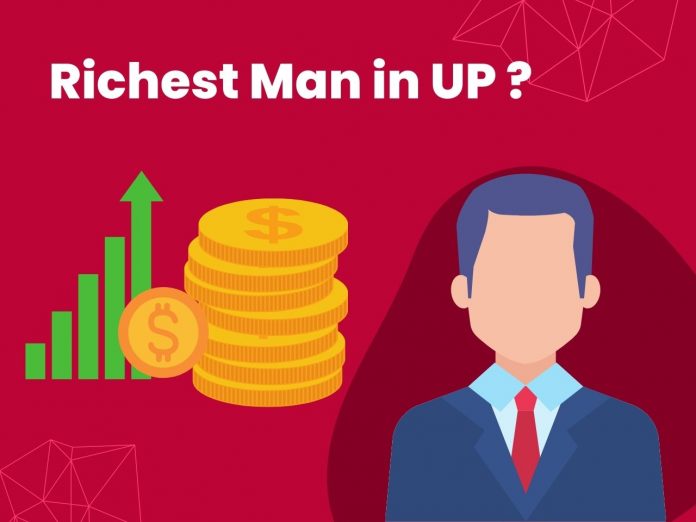 Richness passing through generations is legacy but richness proclaimed through hard work and efforts is what true affluence is. Many individuals out there are rich in their own aspects but, have you ever wondered who the richest person in the state of nawabs is? Yes, here we are talking about one of the biggest states, Uttar Pradesh of the golden bird: India! The state is known for its mouth-watering food, wealthy people and their well-to-do lifestyle. Wondering, ‘who is the richest man in UP in 2022? Your search ends here’! We are here to help you dive in the riches of the state, and know about some of the richest of the richs! If you are thinking how many billionaires in Uttar Pradesh, you certainly cannot count this!

Uttar Pradesh is a north state of India, which has got more than 200 million people living in it. This densely populated state has produced some of the richest men of India. With their perfect planning skills, perseverance and hard work, these men have acquired millions of dollars’ worth assets and all that cash earns them a handsome amount of net worth. We all know about the elite billionaire’s lifestyles and their immense wealth. Apart from Bill Gates, Warren Buffett, and Larry Ellison, there are many Indians who are part of the world’s richest list.

Read about secrets to get rich.

Rich Dad Poor Dad : What The Rich Teach Their Kids About Money That The Poor And Middle Class Do Not!: (25th Anniversary Edition)
Check Price !

Casting some light on the same, given below is the list of richest men in UP in 2022. So, what are you waiting for? Read the article ahead and know about some of the most affluent people the state is home to! Here is the list of the top 10 richest people in Uttar Pradesh.

Vijay shekhar sharma – one of the richest man in UP

This is not just about a businessman who flourished, but, a man who made other businesses too flourish. Paytm is a house name when it comes to doing some everyday transactions, paying bills as well as doing large business transactions. Vijay Shekhar the Chief Executive Officer of this leading payment mechanism has proclaimed a net worth of more than INR 17,000 crores. Richest business man in UP, Vijay Shekhar was enmarked in the Forbes youngest billionaire list in 2017 as well as 2020 with the respective worth of $1.2 and $2.3 billion. Thus, it can evidently be seen that Vijay Shekhar is a prominent self – made businessman touching the skies high.

Manoj Bhargava – Richest man in UP

Manoj Bhargava is an American entrepreneur having his roots in Lucknow, India since his birth year: 1953. He has gained tremendous success with his innovative company concepts. He is the Founder and chairman of Innovations Ventures LLC. One of the products that reached stepping to success was the manufacture of a 5 hour energy drink. Claiming a whooping net worth of $4 billion, Manoj Bhargava, is amongst the richest individuals across the globe.

Kazim Ali Khan was born on October 16, 1960 an Indian bureaucrat and representative of UP’s 16th Legislative Council.  56.89 crore and is one of the leading ten billionaires. Alumnus of the most premium institutions across the globe, his say in political matters has always done rounds!

One of the highest acclaimed movie producers, this UP man has a striking net worth of around $50 million. He has produced many famous movies and Mr. India, Wanted and the list continuing to infinity. This man is nothing less than a talented individual who rose to fame through his hard work in the field of movie industry.

Amitabh Bachchan – Richest man in UP

A film star that rules the heart of people of all age groups to the lifeline host of the TV show, Kon Banega Coreorepati, Amitabh Bachchan hails from the town of Allahabad in Uttar Pradesh. Needing no introduction, this sensational star can be proclaimed as one of the most affluent individual who rose to prominence from this state. The actor is also known for claiming high worth amounting to be $ 500 million. Furthermore, this person is known for putting some of the finest movies on the big screen with his acting skills being the top – notch priority.

Hence, clubbed up is the index of some of the most richest people in Uttar Pradesh and their net worth climbing the stairs of crores. Also, their talent, sheer determination, perseverance together with the strong will to rise to prominence is what that drives them to this ability today. From a country which is known to have the most talented minds, leaving awestruck is the high returns people claim today, in the modern world dipping their toes into different industries such as corporate sector, politics as well as acting industry.

Uttar Pradesh is extremely rich in terms of natural resources, whereas the infrastructural sector is not that well developed. With the current market condition and growing expenditure, some businessmen became billionaires in Uttar Pradesh. People from olden days were quite famous for amassing fortunes through their business capabilities. At present, many are following the same strategies for creating wealth. It is said that India is the richest country in the world and it may seem like a cliché but our nation is truly one of the richest regions in the world. We hope that the index of richest people would have answered you question of who is really the richest person in UP?

India is the most populated country of the world, with more than 1.25 billion people. From Mahatma Gandhi to Mukesh Ambani, India has produced many prominent leaders as well as business giants who have led this country in every possible way. Just like every other aspect of Indian history, there are a lot of astonishing records to know about its richest citizens as well. We hope that this list of some richest individuals will help you gain a grip on the same! Thus, with innumerable rich people in the state, one can easily understand that determination paves way to triumph.