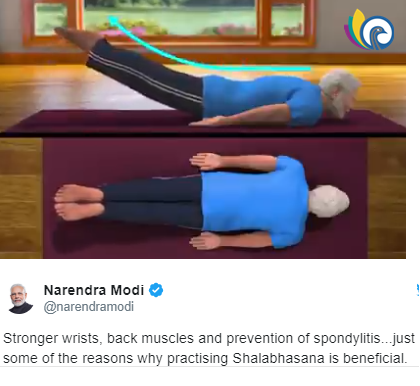 Prime Minister Narendra Modi has posted another video of Yoga on his twitter account. On Monday morning PM modi posted another video which shows the importance of doing “Shalabhasana”. In this video animated version of PM Modi can be seen doing Yoga while the voiceover outlines the benefits. The animated video is well created because it does not only show how to perform “Shalabhasana” but its benefits also. The animated video is not that much longer, but one can see and observe that PM Modi is trying to teach people the importance of doing Yoga.

Stronger wrists, back muscles and prevention of spondylitis…just some of the reasons why practising Shalabhasana is beneficial. #YogaDay2019 pic.twitter.com/etloBuR7KB

PM Modi tweeted that Shalabhasana can make wrists stronger and improve back muscles. The importance of being healthy has increased among people significantly because of awareness about Yoga. The Modi government’s cabinet ministers are all going to celebrate 21st June as world yoga day along with ordinary people. There have been many occasions where PM Modi has promoted the culture of practicing Yoga. While posting this video, PM Modi said that Yoga is a passport of staying fit and getting a healthy body. PM Modi thinks staying fit and healthy shall be a person’s priority, and by doing Yoga regularly, they can achieve some tremendous intellectual limits.

PM Modi himself is going to lead the Yoga program, which is going to held in Ranchi. Shalabhasana is one of the hardest yoga asanas since it requires to be more flexible and consistent and here are some key benefits of doing Shalabhasana:-

The United Nations Assembly has already declared 21st June as International yoga day, and this year’s theme for yoga day is going to be “climate action” focusing more on environment and related issues. [/et_pb_text][/et_pb_column]