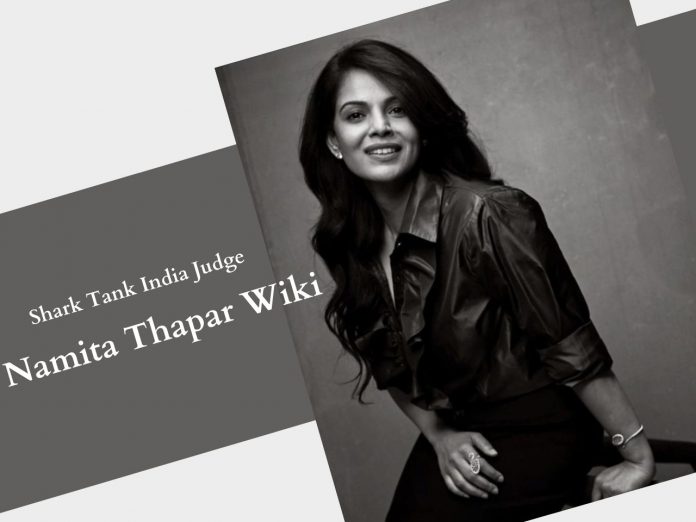 Money and kindness combined together makes Namita Thapar. Shark tank judge Namita Thapar, though being a prominent name in the business industry came to the forefront after she made an appearance in the amazing TV show, Shark Tank. The show revolved around a basic notion of providing funds to the business ideas which have the capability to scale great heights. She proves right the statement that, investment in education pays the best result. As can be seen explicitly, she is an individual that is leaving a mark not only in the sector she is employed in but on all the blooming minds that have a will to showcase their talent to the world outside and turn out to be millionaires. Indeed, she focuses on the path of determination, perseverance, and a will to do something great in life. As a person who is active in promoting education and entrepreneurial skills among children, it can be stated that she is a pure soul, which not only believes in excelling but also helping others by illuminating their path.

Thus, to motivate and inspire you, here is a short description about Namita Thapar, an entrepreneur, women activist as well as a role model for many. Read the article ahead as it will surely help you get more focused!

Namita Thapar Wiki – Everything you need to know

Namita Thapar’s Personal Life, revolves around his husband and two sons. Namita Thapar’s husband’s name is Vikas Thapar, a businessman she has two sons named Jai and Vir. She stated that being a Bollywood freak, she has named her sons after the famous movie, Sholay! To elucidate about what she likes the most, travelling and reading make to the list without any doubt. Other thing that constantly guides her motivational path is meditation. Being the one who takes care of her well-being as a top-notch factor, spends enough time on her personal care. Namita thapar’s age is a factor that anyone can get surprised of! Indeed, this 45 years super businesswoman is a self-made face in this world, and at such a young age she has managed to touch the skies high. Namita thapar net worth, is an eye-opener for what a woman can achieve, with a whooping net worth of Rs. 600 crores, her success definitely has no bounds.

A student who strived to top the class, she was a gem when it comes to studies and academics. She completed her schooling from Pune and then, took a step forward in the journey by pursuing her graduation in B. Com from Savitribai Phule Pune University, again completing a milestone. At the same time, she too enrolled herself for CA under the renowned ICAI. Her next step that strengthened her path to professional expertise included studying MBA from Fuqua School of Business at Duke University in Durham, North Carolina. Thus, it can strongly be perceived that her strong educational base has made her path to glory more widened.

Namita joined Emcure as CFO following six years at Guidant Corporation, USA. Her responsibilities grew to cover the market in India, and she has become the Chief Executive of Emcure Pharmaceuticals. Namita additionally serves on the Fuqua School of Business India’s provincial steering committee. Stands here on TiE Mumbai Board of Trustees as a member. In addition, she is an official participant of the Young Presidents Association. Aside from her profession, she is a regular guest at major venues including Harvard Business School, IIM, the ET Female’s Summit, FICCI, and others. She launched a series known as Unconditional Yourself with Namita, where she gives speeches regarding women’s wellness and healthcare. Thapar is the founder and CEO of Incredible Ventures Ltd, an educational organization that provides professional training.

She was recently featured on Shark Tank India, a television program in 2021, as one of the judges dubbed as sharks. The show revolved around providing monetary support to the growing businesses, which have a capacity to scale heights.

A few words about Emcure Pharmaceuticals

Emcure Pharmaceuticals is a worldwide leading pharmaceutical firm headquartered in Pune, India. Capsules, pills, and dermal fillers are among the products offered by Emcure. Although headquartered in Pune, the business has evolved its activities globally. Its annual revenue is Rs. 6,000 million accounting to be $ 750 million. It operates in 70 nations and has a team of over 10,000 employees.

Shark Tank India was an entrepreneurial show where 7 judges also proclaimed as sharks encountered hundreds of business owners, with their unique ideas of scaling business to heights. Seeing their pitch and analysing their ideas, the judges invested in their companies. The investor in turn got a share of equity in their company, providing them a stake. Furthermore, the show is inspired from a USA based show. Thus, moving across the same lines of thoughts, the show became fiercely popular among the Indian audience as well, because of the idea it relies on. The show featured judges which are self-proclaimed business owners, such as Peyush Bansal, Founder and CEO of Lenskart, Aman Gupta co-founder of BoAt and the list has other prominent names.

Business is definitely not a path of roses; thorns too are a part and parcel of corporate life. But, what values the most is taking smaller steps that can help you achieve your long term goal. Everything together bundled up makes an individual’s path to triumph more glorified. With the leading businesswoman rocking the floor with her education from varied prominent institutions and awards that paved her way to the pinnacle of triumph. Also, as the audience have liked the most about is her way of speaking and being so kind. The way she supported the small scale business owners especially women was just incredible. Her actions have made one thing clear that women have potential to master every skill provided they are guided and provided with the resources required.

In a nutshell it can be accessed that, Ms. Thapar is an example of how success comes to you eventually when you are dedicated to achieve your objective. So, pull your socks up as your potential to get renowned lies in the power of your hard work!