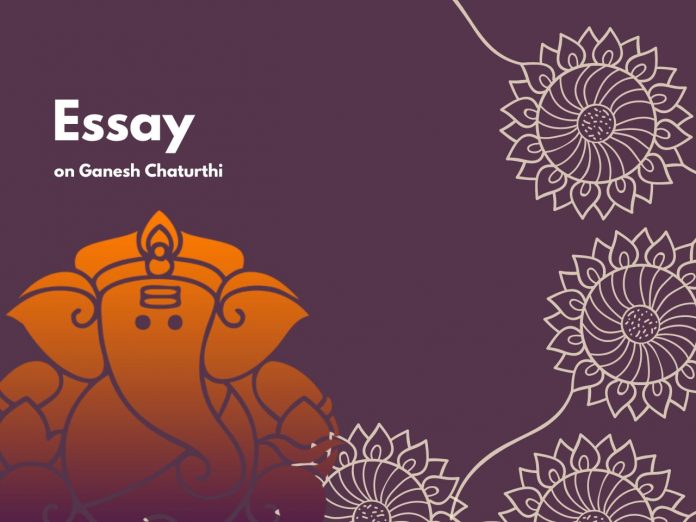 In India, the festival is celebrated with great fanfare, and people from all walks of life take part in the celebrations. The festival is also celebrated in many other countries, including in the United States, United Kingdom, and Canada. The celebrations vary from country to country, but the underlying message remains the same – to celebrate the birth of Lord Ganesh and to seek his blessings.The festival is dedicated to Lord Ganesh, the elephant-headed God of wisdom and prosperity. During the festival, elaborate pandals or stages are set up in public places, where people worship and offer prayers to Lord Ganesh. Devotees also sing devotional songs and dance in his honor.

The festival of Ganesh Chaturthi is a time of great happiness. It is a time to come together and worship Lord Ganesh, and to seek his blessings for a prosperous and successful life. People regard this auspicious day as a symbol of happy life free from any obstacles on the path.

Essay on Ganesh Chaturthi in English for Students

Knowing the importance of this festival given below is an essay on Ganesh Chaturthi in simple English language that will help you get great insights about this festival.

Ganesh Ji is a popular Hindu deity who is known as the remover of obstacles. He is often invoked at the start of new ventures or at times when difficulties arise, as it is believed that his presence will help to overcome any obstacles that may be encountered. In Hindu mythology, Ganesh Ji is the son of Shiva and Parvati, and his birth is said to have been marked by a number of miraculous signs. He is usually depicted as a human figure with the head of an elephant, and is often holding a laddu (a type of sweet) in his trunk. Ganesh Ji is worshipped by Hindus all over the world, and his birthday (known as Ganesh Chaturthi) is celebrated with great fanfare in many parts of India.

Why we celebrate Ganesh Chaturthi festival?

Ganesh Chaturthi is a very important festival in the Hindu calendar, given below are few lines on Ganesh Chaturthi and the way it is celebrated. It is celebrated to mark the birthday of Lord Ganesh, the elephant-headed God who is the son of Lord Shiva and Parvati. Ganesh Chaturthi is usually celebrated in August or September and the celebration lasts for 10 days. On the first day of the festival, a beautiful clay idol of Lord Ganesh is made and installed in homes or public places. People offer prayers and sweets to the Lord and seek his blessings. The festival ends with the immersion of the idol in water.

The festival of Ganesh Chaturthi is steeped in history and tradition. It is believed that the festival was first observed by the great saint and poet, Shankaracharya, in the 8th century CE. Over the centuries, the festival has evolved and become an important part of the cultural and religious fabric of India. People of all ages and from all walks of life come together to participate in the festivities.

Ganesh Chaturthi is not just a religious festival; it is also a time for people to come together and celebrate the spirit of unity and brotherhood. The festival is a reminder of the importance of working together towards a common goal. It is a time to rejoice and be thankful for the many blessings that we have received.

Legendary story behind the celebration

According to legend, Ganesha was created by Parvati, the wife of Shiva. She then tasked him with guarding the door while she bathed. However, Shiva, her husband, returned home and was angered to find Ganesha guarding the door. He demanded that Ganesha be removed, but Parvati refused. In a rage, Shiva cut off Ganesha’s head. Parvati was devastated and Shiva realized his mistake. He promised to replace Ganesha’s head with that of the first creature he encountered. As it happened, the first creature he encountered was an elephant. And so, Ganesha became the elephant-headed God that we know today.

What are the special celebrations done in Ganesh Chaturthi

Ganesh Chaturthi is a special celebration in honor of the Hindu God Ganesh. It is observed on the fourth day of the month of Bhadra, which typically falls in August or September. The festival typically lasts for 10 days, culminating in a grand finale on Anant Chaturdashi.

On the first day of the festival, a clay statue of Ganesh is placed in a temporary shrine. The shrine is decorated with flowers and other offerings. On the tenth day, the statue is carried in a procession to a river or ocean and immersed in the water, symbolically releasing Ganesh back to the cosmos.

Ganesh Chaturthi is a time for joy and celebration. Families and friends come together to worship Ganesh and enjoy the festivities. There is music, dancing, and feasting. It is a time to remember the power of Ganesh and to give thanks for all the blessings in our lives.

There are many reasons why Ganesh Chaturthi is celebrated publically. For one, it is a very popular festival in India, and so celebrating it publically helps to ensure that as many people as possible can take part in the festivities. Additionally, public celebrations tend to be more vibrant and exciting, which helps to create a more festive atmosphere. Finally, celebrating Ganesh Chaturthi publically also helps to raise awareness about the festival and its significance, which can help to ensure that it is celebrated for many years to come.

Everything to know about Ganesh Visarjan

Final words on why we celebrate Ganesh Chaturthi festival ?

India is a land of myriad festivals and each one is celebrated with great gusto and enthusiasm. One such festival is Ganesh Chaturthi which is celebrated in honor of Lord Ganesh. It is observed all over the country with great pomp and show.

This 10 days of this festival is a period of joy and happiness whereas on the third day the idol of Lord Ganesh is taken in a grand procession to be immersed in water. This signifies the end of the festival. The whole atmosphere during the festival is one of joy and gaiety. People can be seen dancing and singing on the streets, while the temples are thronged with devotees. Ganesh Chaturthi is indeed a very special festival which is cherished by all. Thus, we hope that from this essay on Ganesh Chaturthi in simple English language you must have got great insights into why we celebrate Ganesh Chaturthi festival. Lastly, wishing you all a prosperous Ganesh Chaturthi.