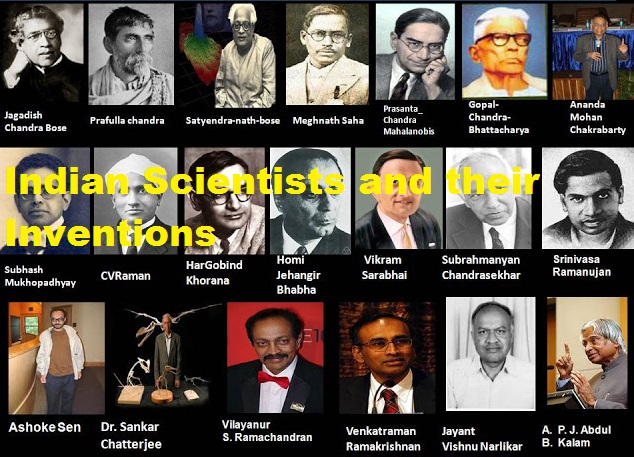 From the last two centuries, science and technology have gone through exponential growth, due to discoveries and inventions made by scientists and inventors. From Space Exploration to Atomic Energy to Quantum Mechanics, we Indians are never behind in exploring the new horizons unknown to humanity. Indian scientists have shown their intellectual rigor and brilliance from time to time with their inventions and scientific findings.

5 Famous Indian Scientists and their Inventions 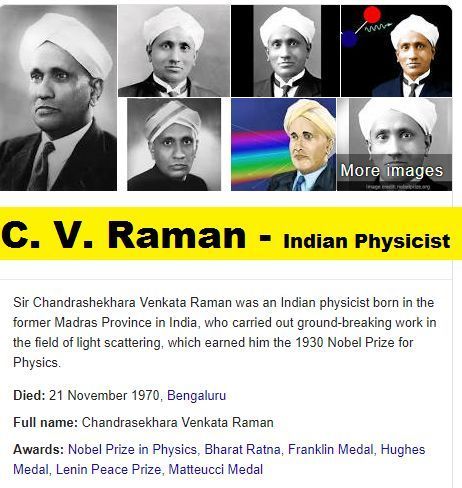 The honor of being the first Asian and non-White Nobel laureate in Sciences was received by Chandrasekhara Venkata Raman, widely known as C. V. Raman.

He was born on November 7, 1888, in Tiruchirapalli, Madras Presidency.  He was the pioneer of the Physics in India. In 1930, he received the Nobel Prize in Physics for the critical findings on the scattering of light and Raman Effect. When a light ray traverses through a transparent material, some of the light gets deflected, the wavelength of deflected light changes, this phenomenon is known as Raman Scattering which is the result of the Raman Effect.

Raman was also obsessed with studying classical Indian musical instruments like Tabla, Veena and Mridangam. He studied the harmonic nature of sound.

Dr. Homi Bhabha – Father of the Atomic Energy in India 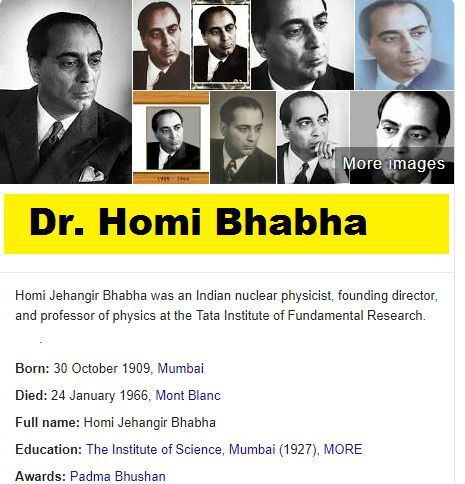 A nation isn’t considered a powerful nation until it becomes a nation with nuclear power and arms. Homi Bhabha anticipated the power and importance of atomic energy and played a key role – Father of the atomic energy in India.

Dr. Bhabha was born on October 30, 1909, in Bombay, British India. He became the first Chairman of the Atomic Energy Commission of India. His career in Nuclear Physics started when he was in the United Kingdom. He returned to India, followed by the outbreak of WWII. He played an essential role in convincing the Indian government to start an ambitious nuclear program. Bhabha wanted to use nuclear energy to fulfill India’s energy consumption. Unfortunately, he fell victim to an airplane crash in Swiss Alps and passed away on 24 January 1966. However, after his demise, many conspiracy theories surfaced include the one which suggests the involvement of the Central Intelligence Agency (CIA) in this to paralyze the Atomic program of India. 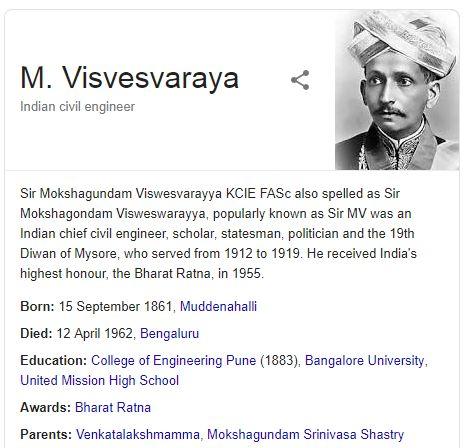 When it comes to mentioning the names of top Indian scientists, you can’t ignore the name of Sir M. Visvesvaraya. He was a man of multiple talents.

M. Visvesvaraya’s full name was Mokshagundam Visvesvaraya. He was given the honorable title of ‘Sir’ for his great achievements. He was born on September 15, 1860.  Sir Visvesvaraya was a renowned civil engineer, scholar, and Dewan of Mysore from 1912 to 1918. He worked as the chief engineer of State of Mysore in 1909. He’s known for building a flood protection system for the Hyderabad. Apart from the achievements mentioned above, he received the credit for inventing ‘Automatic Sluice Gates’ and ‘Block irrigation system,’ these innovations are regarded highly in engineering. Government of India honored him with the highest honor, Bharat Ratna.

Every year engineers of India celebrate his birthday, 15th September as Engineer’s Day.

Some men live a short life, but in their short life, they leave the high marks of their achievements.

In this list of top scientists of India and their inventions, we’d like to introduce you to one of the finest minds India has ever had – Srinivasa Ramanujan, the brilliant Indian mathematician, who lived during the British Raj. The most brilliant thing about Ramanujan’s career is that he almost had no formal training in pure Mathematics. Ramanujan is famous for his contribution to the field of Mathematical analysis, number theory, infinite series, and continued fractions. After facing a lot of hardships and failures, he went on to work with famous mathematician G. H. Hardy at Cambridge. Living in England wasn’t easy for him either; fell severely ill due to weather and scarcity of vegetarian food. He returned to India slightly after he passed away in 1920, at the young age of 32.

Interestingly, Ramanujan was a deeply religious Hindu, and he credited his mathematical talent to be the blessing of the family goddess. He said, “An equation for me has no meaning unless it expresses a thought of God.” 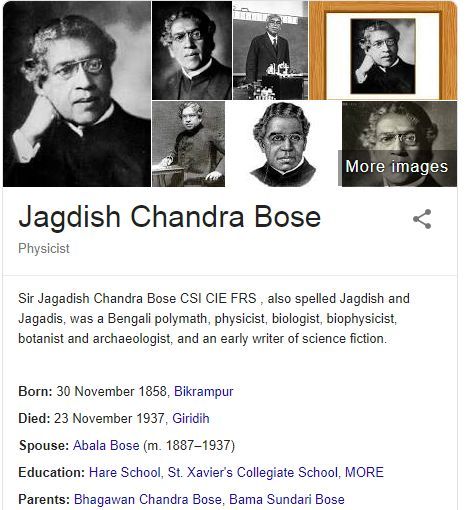 Jagadish Chandra Bose is the name everyone has heard at least once during the biology or science lectures. He was a great Indian polymath, known for his contributions in biology, botany, physics, and archaeology. The person who pioneered the research of radio and microwave optics is none other than Acharya Bose.

He was born in West Bengal on November 30 1858.  However, he is world famous for his contributions in botany. With the help of semiconductor junctions, he was the first person to discover radio signals. He demonstrated the wireless connection for the first time. The most magnificent generous gesture shown by him was that he made his inventions freely accessible to everyone to make progress in development.

A Crescograph is the device he invented to measure the response of plants to stimuli. He proposed that plants can indeed feel pain and many other feelings. He is also known as a great science fiction writer; he’s regarded as the father of Bengali science fiction.

The reason India has a glorious future ahead is because of the strong foundations of science and technology these great scientists have laid with their great discoveries and inventions. We must honor them by sharing their stories with the future generations to inspire them.