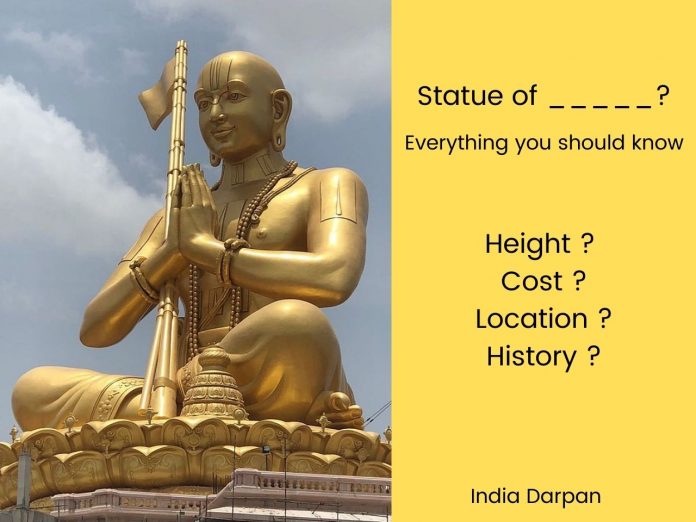 Statue of equality latest news is what you might be searching for days due to the traditional values the sculpture has in place with the nation. Being an Indian definitely engrosses a different kind of happiness among individuals today. The joy of being from a land where love and prosperity blooms are just difficult to explain and the pride is beyond words. India is a land of different cultures, religions, and ethnicities where respecting each other is the prime focus. Being a heritage of norms, regulations, and traditions, India is no less than a domain of happiness and respect for individuals from different backgrounds. Sustaining life for numerous tribes, India stands equally whenever religion is to be given a thought. Statue of equality India is the finest figure constructed to wave high the same lines of thoughts. The Saint is credited with assisting many individuals in breaking free of the shackles of societal, cultural, academic, and socioeconomic disparities. Saint Ramanujacharya held that all human beings are entitled to equality and did not make distinctions among them. He was always in charge of extending temple gates to persons who faced discriminatory treatment, hence, extending the thought of equality wide long.

Sri Chinna Jeeyar Swami conceptualized the vision of making this majestic statue. The unveiling of the sculpture, and the whole complex, have indeed been included in the ceremony. On February 6, 2022, honorable Prime Minister Narendra Modi dedicated the magnificent sculpture of Sri Ramanujacharya. The Statue of equality inauguration was indeed a moment of pride.

The figure is constructed of “panchaloha,” which translates to five metallic materials namely, gold, silver, copper, brass, and zinc. Statue of equality height’ is the most amazing feature to ponder upon, being 216-feet in length; it is one of the highest metal sculptures in a seated place on the list. The Statue of Equality rests atop a 54-foot-tall structure known as Bhadra Vedi.  The structure holds library resources and a research institute, sacred texts, a theater, as well as an instructional exhibition highlighting Sri Ramanujacharya’s achievements and beliefs. The Vaishnavite soul was a supporter of social justice. Several believe his crowning accomplishment to be the spread of Vasudhaiva Kutumbakam. Several academics are supposed to have continued in his footsteps, as he is shown to have influenced the Indian writings of historical authors such as Bhakt Ramdas, Kabir, and Meerabai.

Thus according to the holy scrolls, he continued to live over 120 years, a statement that historians today including specialists reject. The priest is claimed to also have traveled throughout the nation in the 11th and 12th centuries to advocate social and economic equality. Ramanujacharya is now regarded as a Vedic intellectual that revitalized the Bhakti Revolution. In three primary interpretations, he offered an ideological foundation for the conduct of bhakti proclaimed as spiritual adoration, the Shri-bhashya, and the Bhagavadgita-bhashya. He furthermore called again for the preservation of the environment as well as its assets, such as the atmosphere, water, and earth.

The figure’s unveiling included a 2-week commemoration of Sri Ramanujacharya’s 1,000th birthday commemoration. The Statue of Equality is housed on a 45-acre compound in Hyderabad’s suburbs. In 2014, the cornerstone was set. The 1,000-crore construction was totally supported by contributions by followers throughout the world. The sculpture was designed by Sri Chinna Jeeyar Swamiji, his able follower of Sri Ramanujacharya Monastery. Ramanujacharya was indeed a prominent supporter of Vishishtadvaita who advocated again for the value of devotional commitment a sense of duty as a path to spiritual development. He largely succeeded for the benefit of humankind in the concept of equality across the board, irrespective of origin, sexuality, color, class, or faith. He encouraged every individual to go into monasteries, especially some who faced tremendous prejudice. For societal progressives throughout the globe, he is a perennial symbol of justice.

Indians are known widely for their deep-rooted sentiments and the value they give to their existence in this humble land. And, to display and honor the pure soul behind such dedicated activities this Statue of Equality has been carved out in the pure sense of utmost beautification. Saint Ramanujacharya was recognized not only because of his teachings but also his devotion to the deities of all religions equally. This holy saint is the massive spring upon which all modern systems of thinking which espouse justice have poured as streams, droplets, and rivers. This is a matter of historical record. This holy character has purified the world with his existence for thousands of years. The nation is promoting his beliefs without setting him up. His identity is shrouded in mystery. As a result, the mystical element has vanished, and ideals are fading in civilization. Barriers, unseen yet impenetrable, have indeed been erected to divide humanity. Dignity has faded into obscurity, and hence, it was an important step to once again raise awareness among the people.

1. Where is the Statue of equality located?

Statue of Equality is situated in Hyderabad and the contract for its building was given to a Chinese firm.

2. Who was Saint Ramanujacharya?

Saint Ramanujacharya was a preacher and theorist from South India, identified as the primary and greatest significant figure in the religious Hindu religion. Ramanuja arrived in Shrirangam after a perilous journey, when he established not only shrine services but also established centers to spread his ideology of dedication to the Hindu deity God Vishnu and his wife Lakshmi Ji.

3. Why has the sculpture of equality been created?

4. What is an intriguing aspect of Statue of Equality?

The most interesting aspect is that the 108 Divya Desams – shrines dedicated to Lord Vishnu and the avatars – have been reconstructed here including part focuses on structural intricacies and exquisite magnificence. Someone unable to attend these 108 Divya Desams around the nation may show their respect and seek the divine blessings of Vishnu and the different avatars in the vicinity of the Statue of Equality.