If you ask me who is the real Iron Man, then I’ll say it is the Sardar Vallabhbhai Patel. He is known as one of the most prominent freedom fighters and the most influential politicians in the History of India. The Sardar Patel, as people call him with love, is known as the Iron Man of India because of the Strong Stances he took while building the nation.

Many people still don’t know the history of Sardar Vallabhbhai Patel and his contribution in building India after partition.

In this post, we are going to do the same and sharing the Sardar Vallabhbhai Patel Biography, which will give you the idea of how great he was. 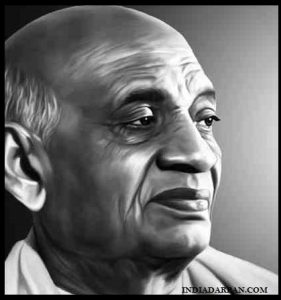 The Sardar Vallabhbhai Patel was like the ordinary kid . He was born in Nadiad, Gujarat on 31 October 1875 to Jhaverbhai Patel and Laad Bai Patel. He was an ordinary kid who completed his matriculation at the age of 22 and later went to England to pursue his dream of becoming the  Barrister. At the age of 36, he became the barrister, and in that times, he was known as one of the best barristers in India.

Around the year 1917, he attracted to the appeal of Mahatma Gandhi and joined the Freedom Movement. In the year 1920, from which his political career took a rise, he started a non-violent movement by igniting the people from smaller parts of Gujarat. He was known for his fiery and encouraging speeches in the political rallies at that time.

The Sardar Patel become active in Politics after listening to the speech from Mahatma Gandhi. He was a big follower of Gandhi and his principals of Non-violence. In 1920, Sardar Patel won the fight against the British government by arranging a non-violent Civil disobedience protest and from that time his political career took an upward momentum. With the success of Civil Disobedience Movement, he became one of the most powerful political leaders in Gujarat, and that gave him the national attention.

In the same year, he was appointed as the President of the Gujarat Pradesh Congress Committee and stayed in the chair till 1945. Also, he was elected as the Municipal President of the Ahmedabad in years 1922, 1924 and 1927. Also, he led the Satyagraha Protest in Nagpur in the absence of Mahatma Gandhi while he was in prison and it became a successful movement. One of the most significant achievements of him before independence was becoming the Indian National Congress President in the year 1931. As the Party President, he planned the All India Election Campaign for the Party in 1934 and 1937.  Due to the struggles of the  Sardar Patel and all other freedom fighters, India got independence and British Retreated to their country.

Why is Sardar Vallabhbhai Patel Known as Iron Man of India?

His stance of the Partition of India deferred from the views of Gandhi and Nehru. Being against the Partition, he made his decisions in uniting all of the princely states after unfortunate partition and joined them under the Indian Republic. After the Independence and the Partition, India was a weak nation, and that’s when Sardar Patel came and took substantial actions to unite all of the Princely States under the banner of the Republic of India.

That’s why he is known as the Iron Man of India.

Do You Know ? – To Honor the courage and the decisions of the Sardar Patel, the Indian Government decided to erect his statue which is known as the Statue of Unity. ( World’s Tallest Statue – 182 Metre)

Big people have Big achievements under their belts. The Sardar Patel is no exception to this statement as he has more than enough accomplishments under his belt and all of them helped India to be on the place it is right now.

1. First one is becoming the Indian National Congress President in the Year 1931. He became the president in Karachi division and stayed on the post for a long time.

3. While Serving as the Home Minister and the Deputy Prime Minister, he united all of the  Princely states in the Republic of India. The most notable union was the Princely State of Hyderabad, where he had to use the Army and freed the state within Five days.

4. Mr. Sardar Patel received the Highest Civilian Award from the Republic of India in the year 1991. It was a Posthumous award that was awarded for his achievements in shaping the Indian subcontinent.

Sardar Patel was a great person, and you cannot compare him with any other freedom fighter. His achievements are indeed significant and essential for the Indian subcontinent. Being the strong political leader and merging 555 princely states in the Indian Republic is a significant achievement under his belt, and that’s why the people started calling him as the Iron Man of India. I hope you’ve learned everything about the Sardar Vallabhbhai Patel in this short biography.