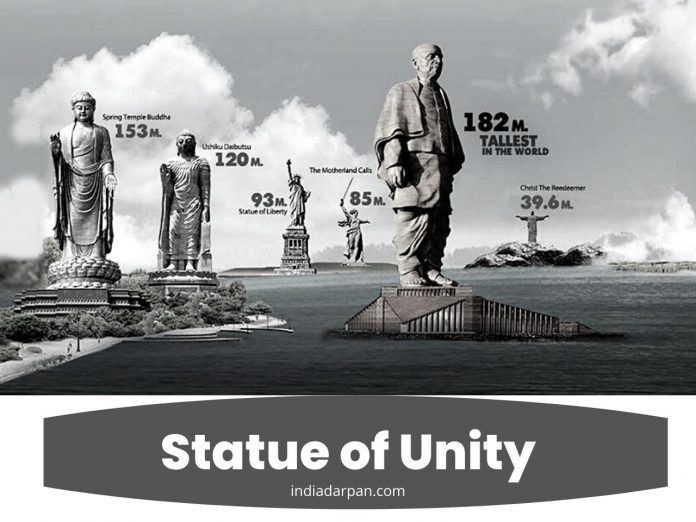 India is in the limelight nowadays in international media outlets for the Statue of Unity. The Brainchild of the prime minister Mr. Narendra Modi is now completed and inaugurated by himself. The Statue of Unity is nothing but a statue of Iron Man of India, Mr. Sardar Vallabhbhai Patel. What is the main attraction here? Well, it is the longest statue in the world that surpasses the heights of the Spring Temple Buddha in China and Statue of Liberty in the United States of America.

The Sardar Vallabhbhai Patel was the Indian Freedom Fighter and the politician, who is known for their strong actions against the Royal families in India.

The Sardar Patel tool the strong measures to unite all the royal families and merge them in the Indian Subcontinent.

That’s why, the Sardar Patel is known as the Iron Man of India, who took extreme steps with calm to maintain the unity of India after the Independence from Britishers and the Partition of Pakistan.

What is the Statue of Unity?

It is the Statue of Mr. Sardar Vallabh bhai Patel, who was aprominent freedom fighter and the politician in India. The Vallabhbhai Patel united all the royal families in India after the partition and merged the princely states to form current India. To Honor the courage and the decisions of the Sardar Patel, the Government of India decided to erect his statue which is known as the Statue of Unity.

The Statue of Unity is located in the River-Island facing the Narmada Dam. The nearest big city from this Monument is the Vadodara, which is 100Kms away from the Unity Statue. It is not just a statue of Indian politician, but the memorial to honor their contribution towards building the country.

Who Built the Statue of Unity?

The idea of the Statue of Unity is of the Prime Minister Narendra Modi, who wished to dedicate the unique Statue as a tribute to the contributions of Sardar Patel.

We all know the mastermind behind the original Idea, but do you know who built the monument? Who designed the Statue and who did the constructions work? Let’s read about it..

The Statue was designed by Padma Shri Ram V. Sutar, who is a famous Indian Sculptor. Mr. Ram Sutar designed tons of iconic status and the sculptures in India and received the both highest citizenship awards, Padma Shri and Padma vibushans respectively. He handled the design and the culture part of the statue.

Another important aspect is the erection of the statue as it involves human resources and engineering expertise. That task was handled by the Larsen and Toubro, one of the biggest construction conglomerate in India. The company handles the tasks of Acquiring the land, designing the monument, managing the Engineering accuracy and structural stability. The company completes the task of erection within four years.

How Much Does Statue of Unity Cost?

As we took the first look, we got to know that the project was built with hell lot of money. The money that used to build the Statue and provide employment to the thousands of workers, engineers, and the local stores is enormous. According to the official reports, the approximate cost of the Statue of Unity is ₹29.89 billion (US$420 million) and that’s a tremendous amount. The Larsen and Toubro received the contract for designing, construction, and maintenance of this statue monument for ₹29.89 Billion. The ₹13.47 billion was spent on the Statue itself, ₹2.35 billion on the Exhibition Hall and the Monument, ₹830 million for the connecting bridge and remaining ₹6.57 Billion are reserved for the maintenance of this statue for over next 15 years.

Interesting Facts about the Statue of Unity

The people are very interested in knowing the relevant information about this Statue of Sardar Patel. What is better than knowing some interesting Statue of Unity Facts?

1.The Statue of Unity in Gujarat is currently the Tallest Statue in the world with a height of 182 Meters.

2. The Construction of the Statue and the Exhibition Hall was completed within the Record time of 33 Months.

3. The gallery on the Statue can accommodate more than 200 visitors at a time. From the top of the Statue, the visitors can take a bird’s eye view of almost 200Km of the surrounding area.

4. The Construction of this Statue is so sturdy that it can withstand the earthquake of 6.5 Richter Scale and also the wind speed of 60m/sec.

5. The entire project cost ₹2,989 Crore and was entirely funded by the State Government of Gujarat.

6. The three-layered statue consists of the inner layer of RCC, a middle layer of Steel Structure and the outer layer of bronze plating.

How to Book Statue of Unity Tickets?

As this is a monument built to honor Mr. Sardar Vallabhbhai Patel and to boost the Tourism in the state, visiting this statue is not free tour. You have to prebook the tickets to the Statue of Unity, and they have different ticket options.

To book the tickets to the Statue of Unity in Gujarat, you have to visit the  https://soutickets.in/ and then choose the different ticket types. The first ticket is the complete package, which gives you the access to

Second ticket type provides access to everything except the observation deck of the  Statue. A single ticket for an adult is priced at ₹120/- and that includes the bus ride to the venue. Both of ticket shave affordable rates and provide access to the entire site.

The Statue of Unity in Gujarat is indeed the jewel in the crown of India. Being the biggest statue in the world defeating the Great Buddha Statue in China and the Statue of Liberty in America is a great thing. This statue helped to boost the Make in India movement and will boost the Incredible India movement by providing the tourism opportunity. I hope you’ve learned a lot about Mr. Sardar Vallabhbhai Patel and the Statue of Unity erected in honor of the Iron Man of India.