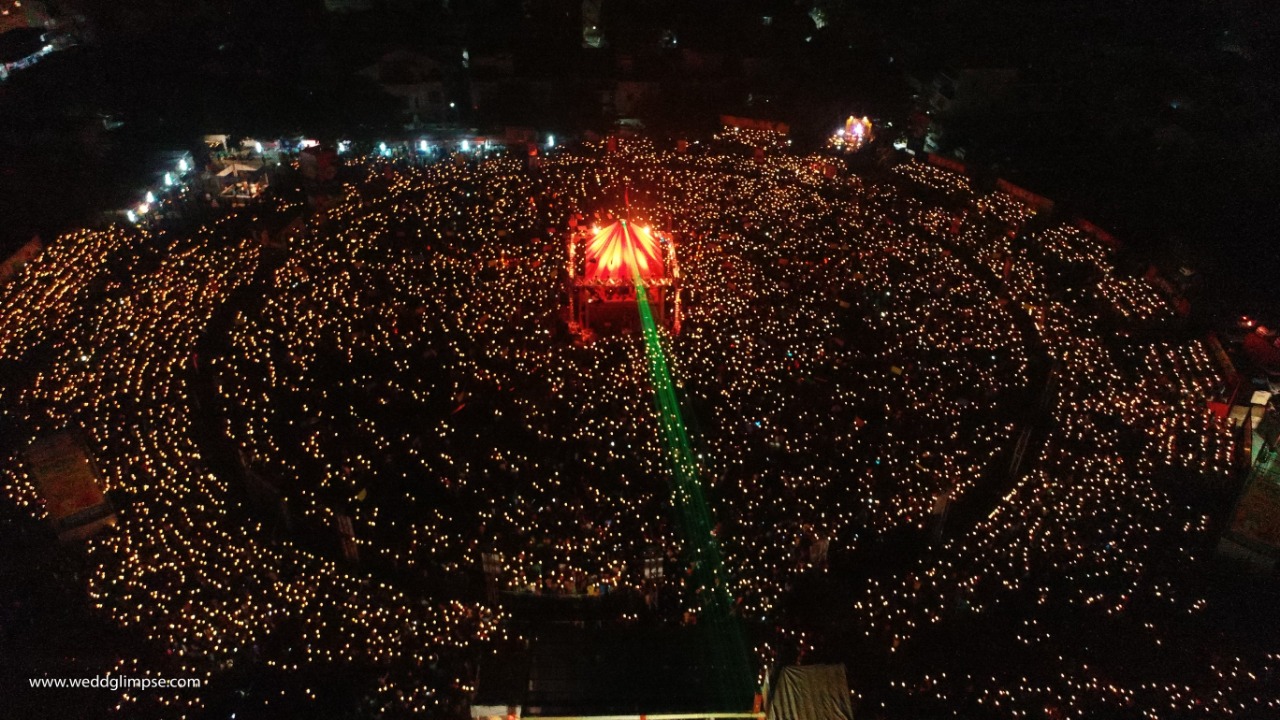 Navratri is celebrated not just in Gujarat, but in Maharashtra and many other states where Gujarati people live. You can find out many places where you can join the masses of people to play Garba with, but there is something special about the Garba of Vadodara.

This Festival is Celebrated by wearing traditional Chaniya-Choli, Ghaghra and Jabbha. Both men and women play Garba together to release the original color of the festival. Navratri usually takes place in the October or September month every year. The Festival is for 9 days where people join their gang to play the traditional Garba together.

Vadodara is the only place in the World where you will witness traditional Garba and not other funky style dances.

United Way of Baroda is the most notable hotspot for Navratri in Vadodara. In fact, it is considered as the biggest Garba host in the entire country where over 400,000 people come together to witness this festival every night.

It’s not just a traditional Garba performance, but much more than that. You can take part in the Garba competition where you can win prizes worth lakhs of rupees. What makes this spot unique from others is they allow traditional dressers only. You can’t play Garba in formals or any other type of dresses, you must have to wear traditional Chanya Choli and Jabbha to play Garba at the United Way of Baroda.

A gang of popular singers come together and organize the world’s largest Garba gatherings for nine nights consecutively for the Garba lovers. To celebrate with a festival at this spot, you have to be well-prepared in advanced. First, you have to complete the registration process of yours.

You can register yourself by visiting their official website. You just need to fill in the registration form by adding your personal information and a photo-id. There is an online payment facility available as well. You can pay for your Navratri Pass online through their website. Once done, your registration is done and you can collect the pass on the given dates from their office.

Why United Way Garba is so much popular?

Well, there is no specific answer to this question available; however, we can say that the Garba of United Way of Baroda is popular across the world is just because of its singer, Mr Atul Purohit. He has been the main Garba singer at the United Way of Baroda for over 20 years. He is still fit and organize Garba every year with so much passion and enthusiasm so that the Garba lovers can celebrate this festival from their core.

The Community has changed the venue from Navlakhi ground to Alembic Groud and now every year, the Garba of the United Way is organized at the Alembic Ground.

Basically, Garba is played and not danced. And Vadodara is the only place in the world where you will witness the original form of Garba in the traditional attire by the Garba players. There are multiple locations in Vadodara and other cities of Gujarat where different types of Garba are performed. However, to witness the original form of Garba, Vadodara is the only spot in the entire country.

If we talk more about the different locations, there are multiple organizations available in Vadodara which are actively organizing Garba for different age groups. You can find out Garba spots for Children only, for Ladies only, even for physically challenged players. Yes, there is one organization in Vadodara where physically challenged people also can groove with their friends to play Garba.

What makes this Festival more colorful is that even foreigners from across the globe come and play Garba at the United Way of Baroda in the traditional attire. This is something which you can’t see on normal days.

Many Garba tuition classes are also there across the city where foreigners and beginners can learn the different forms of traditional Garba to play and perform during the festival.

If you ever visit the City during this festival season, you should not miss attending it. The memories will stay forever!

Ranchi is Gearing up for International Yoga Day 2019