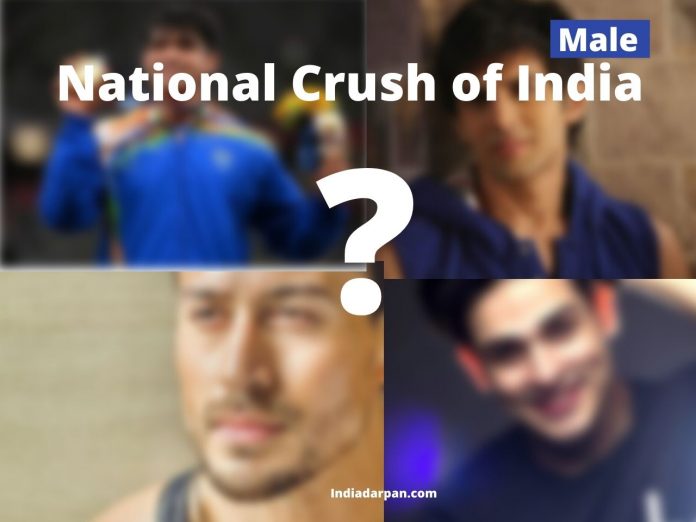 Every girl has a person their heart sets on, maybe a classmate, a colleague or even a boy who was having coffee on the next table! In this world of beautiful faces and souls, there is no one who has escaped from having a celebrity crush. But, are you also wondering, is there a hunk that is loved and admired by every girl across the country? And who has managed to be the national crush of India male 2022? Your wait is all over, here is the list of finest and most adored boys, who have managed to rule the heart of every girl out there. Being the male national crush of India, is indeed, the title every boy craves for.

Living in a world of digitalization and modernization flying to stardom is something which anyone may achieve in a flash, through the inbuilt creativity and a bundle of smiles are all yours surely. In reality, there have already been numerous celebrities who have become nationwide sensations and captured the hearts of the entire nation with just a few photos or videos. And some with their super hit films have made it to the fore.

With a lot of hard work and dedication done over the passage of time, this title is certainly backed by the cutest man of India who has every feature and attribute from a charming face to a kind soul, from a dashing body to a pile of emotions! So, here comes next the list of men who became the national crush of India from Indiadarpan. Get set go; soothe your eyes with some greenery pretty girls!

Neeraj Chopra is an Indian athlete from primarily specialized in the javelin throw. Global Athletics has him rated overall second globally. Becoming India’s first athlete to get on his name the World Record, he is acclaimed globally for his commendable performance in the IAAF World U20 Championships. Along with getting the country laurels and winning the hearts of people, he has become the national crush not only of girls but of boys, sports enthusiasts and everybody falling in the line. The lucky charm of India stole the show with his one statement, saying India cannot be satisfied with just one gold, and has the ability to acclaim many gold medals. National crush of India male Neeraj has left no stone unturned to impress the people.

Priyank Sharma one of the leading actor as well as choreographer is the hotline to 24 x 7 hotness and cuteness. The joyous smile like twinkling stars this national sensation has been a show stopper, for every kid to a teenager. His captivating dance moves have made the country drool over him. Participated in Roadies Rising, Splitsvilla 10 as well as Bigg Boss and made his online presence count for the viewers. This flawless man has made the girls his diehard fan due to his appealing nature.

This royal Kapoor son has made every girl fall for him, including many actresses as well. Popular for his smile and hotness, he is a complete bundle of every feature a girl aspires his man should have. A bold and careless attitude is what that keeps him stand out in front of the other Bollywood sensations. Mesmerizing girls with his acting skills and a perfect wink he is the cutest man of India without even a second thought.

Making girls go crazy his movies have been captivating enough to behold girls. With his movies going hit on national level, he is a lively person who makes a perfect statement without much effort. Every girl has a crush on the million dollar body this actor has. The taste in clothing of the actor that really has rendered Indian cinema elegance and remarkable beauty. This actor and his excellent fashion choices are a refreshing change of pace in the realm of superstar apparel and dressing. Being a fitness freak, he is even the aspiration of every single boy, pan India.

No one can beat his appearance, being one of the fittest actors Bollywood has ever produced. Not at all resisting that fact that he is the most adorable man of India 2022. Known for his hot body and awestruck dance moves he has made his presence in the heart of every girl. Admired by many, being one of the youngest actors he has every talent and passion the ideal crush should have. He is positioning himself as a wellness positive role model in India. His approach tells everybody to lead their lives in their unique manner and ignore naysayers or trolls. This could be a fiction, but this is all true and excellent!

From making girls go wow to imagining his dance moves, this man has always managed to steal the heart of people. With amazing dressing style, his style statement has always made a difference. Handsome is nothing but the synonym of Hrithik, not only the national hunk but is famous across the globe for his styling sense of innovation. Hid dress sense is usually on vogue, and Hrithik has a massive and significant audience or fan following as well.

UPDATE : One of our reader suggested name of Indian actor’s name : Vijay Deverakonda.

Now you must know who is the national crush boy of India is. Managing to be the stoppers to every girls heart these are the sensational handsome boys who are the crush of every girl. It’s fairly tricky to locate every single attribute in one person but what makes a difference to the world is that one crush the heart cannot resist loving and mind cannot resist thinking about all day long. Nevertheless, Bollywood has set the stage on fire with some of the talented, hot and cuteness overloaded actors. It could be their adorable grin, incredibly enthralling looks, pretty performance, their seductive profiles with amazing stature, or fit and athletic physique. The charm and glory the add to the world with their style, looks, physique, mind blowing skills and even more can never be described merely in words. Indiadarpan has put your thoughts, likes and love into words!

Disclaimer : The information provided in this article is totally based on point of view. This is not any kind of official information from any authorities. If you think if any other person deserve to be in the list then let us know via comments.