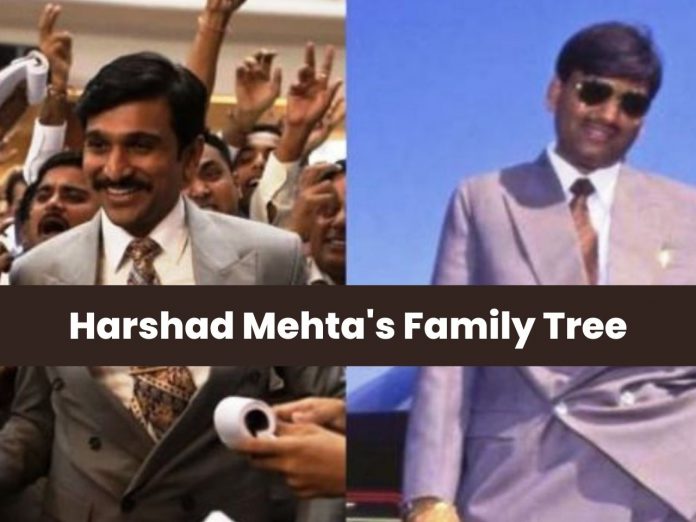 Harshad Mehta, a big bull also known as Amitabh Bachchan of the stock market.  A simple middle-class guy who managed to build so much fortune in the stock market that one could only imagine in their wildest dream.

Harshad Shantilal Mehta was born on the year of 29th July 1954, in Rajkot – Gujarat, India. Despite being born in Rajkot, he spent most of his days in Mumbai. He did his schooling at the Janta Public School and later on did his graduation in commerce from Lala Lajpatrai College.

After becoming a jobber, Harshad Mehta slowly but gradually started understanding the stock market and in the year 1980, Harshad Mehta along with his brother Ashwin Mehta opened up a firm named Grow More Research and Asset Management. The firm soon received great success and became the highest advanced taxpayer firm in India.

As of now, the Harshad Mehta Family net worth in 2021 is whooping 475 million dollars which translates into Indian rupees as 3542 crore INR.

Now many must be wondering how a simple man like Harshad Mehta managed to make such a fortune? It all started when he managed to open his firm and gained membership in the Bombay Stock Exchange.  He found a loophole in the banking system as well as in the broking system and started exploiting them as per his own will.

In simpler words, Harshad Mehta used to take bank money and then invest the money into the stock market. So how did Harshad manage to do that? In those days intra bank transactions were done with the help of brokers, so the bank used to provide a PR – receipt to the broker of the heft amount as a security, and then that broker is supposed to take the receipt to the other bank and deposit it there.

With this simple interchange of PR receipts, the broker would get a certain commission. So far so good? But here is the catch, the PR-receipt amount transaction would sometimes take weeks or even months. So Harshad Mehta took advantage of this scenario and used the PR-receipt money into the stock market and whenever the bank would need a PR-receipt, he would simply take another PR-receipt from another bank and would give to the first one and so on the cycle began.

As a result, Harshad Mehta managed to commit fraud of about 1 billion rupees of the banking system to buy stocks in the Bombay Stock Exchange. Due to such a hefty amount of scams, the stock market observed one of the biggest crashes in history and many innocent investors suffered a loss.

The scam emerged in 1992, followed by a series of cases against Harshad Mehta and jail time. He managed to get out of jail for some time but again got jailed for another case, this continued till 2001 when he died in Jail itself due to a Heart attack.

So what was Harshad Mehta’s Family tree-like and what did he leave behind? Harshad Mehta’s father was Shantilal Mehta and his Mother was Rasilaben Mehta. He was married to Jyoti Mehta and had a son named Atur Mehta. Harshad had three brothers Ashwin Mehta, Sudhir Mehta, and Hitesh Mehta. After his death, all the cases against him were dropped eventually, all thanks to his brother Ashwin Mehta who later on became his attorney and fought to clear his name till 2018.

It is believed that Ashwin Mehta fought every case single-handedly and paid a hefty amount of 1700 crores in order to clear all the debt and the NPA’s owned by Harshad Mehta.

Harshad Mehta Family is Presently living in the United States for a fresh start with his Son Atur Mehta and his Wife Jyoti Mehta while on the other hand Ashwin Mehta currently lives in India and practices law in the High court as well as in the Supreme Court. Ashwin Mehta’s net worth as of now is around 4 million dollars.

It’s been 30 years since the scam of 1992 from which India learned that there was a major flaw in our banking and stock market sector. The laws must be constantly updated as such the market is changing and if not there won’t be much time when we hear about someone else who managed to find a loophole and exploited the current laws even more than Harshad Mehta ever did.

As for Harshad Mehta’s Family, they must be left alone to start their life fresh. Harshad Mehta Family photos must not be kept public as such they are facing the consequences which should have happened and is wrong on so many levels.

The Indian Culture And Traditions – About India