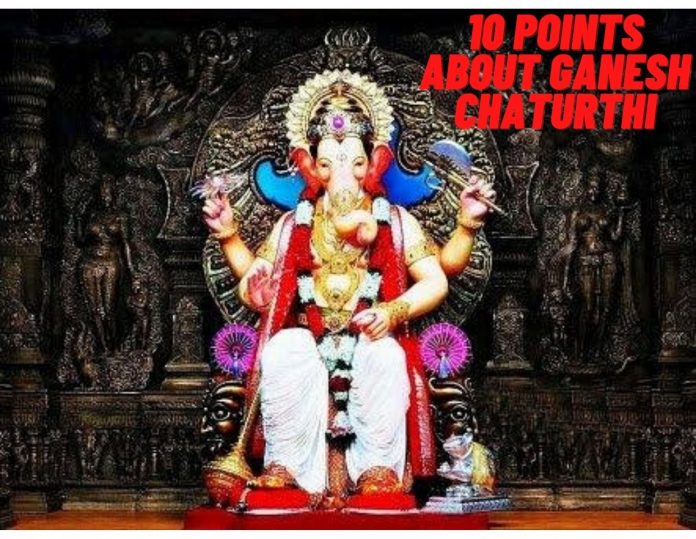 Ganesh Chaturthi is a Hindu festival celebrated by Hindus across India and Western countries. It is Maharashtra’s most auspicious event that falls in August or September. It happens on the Chaturthi Tithi of Shukla paksha in the month of Bhadrapada, according to the Hindu calendar. This year it will be on Friday, August 31st, 2022. Lord Ganesh is the son of Lord Shiva and Parvati, and the festival commemorates his birth. Devotees fast on this holy day and do puja in the afternoon. Following the procedure, a puja is performed in the evening. Chanting of Ganesh aarti, hymns, and mantras. “Om Gan Ganpataye Namah” or “ Ganpati Bappa Mourya, Mangal Murti Mourya” is recited at the time of worship.

Before we provide you with 10 points about Ganesh Chaturthi in English, let us know the significance. Ganpati Bappa is the youngest son of Lord Shiva and Parvati. It is one of the most important festivals of Hindu culture. As per Hindu scriptures, Maa Parvati makes an idol with unguent and sandalwood paste and invokes life with divine powers. The sculpture is called the goddess Mother. He is known for his sharp intellect and wisdom.

Whether it is a home entry or any worship, the name of Ganesh ji is taken first. It is believed not to look at the moon on Ganesh Chaturthi. A tale is sung that Ganesh ji was riding on his Mooshak and falling from it while playing. Ganpati Maharaj cursed the moon for making fun of him. Later, moon realized the mistake and asked forgiveness. On this day, whoever sees the moon face challenges and bad luck. We hope this Ganesh Chaturthi 2022 brings you happiness and joy in life.

Lord Ganpati is the son of Lord Shiva and Goddess Parvati. He is an elephant-headed with a tiara and four podgy hands that hold symbolic objects- a Trishul, an Ankush, a lotus, and a rosary or modak. He is known for his cleverness and sense of humor. He was born on the fourth day of the lunar month of Magh. Therefore, the festival began to celebrate the birth anniversary of Lord Ganesh named Ganesh Chaturthi.

10 lines on Ganesh Chaturthi in English:

We have compiled a Few lines on Ganesh Chaturthi in English. It will be easier for you to read these lines that describe Ganesh Chaturthi. Ganesh Ji, who is he? What is the date of his birthday? When will it be celebrated? And what are Lord Ganesh’s several names? etc. If you need an Ganesh Chaturthi essay, enter these lines in a school competition. It will assist you in recalling data and organizing your essay. So, let’s get started:

This first set describes the Ganesh Ji. A second set explains what the other name of Ganesh Chaturthi is, when it is celebrated, how long the festival lasts, and who started it. These lines can be used in speeches or as extempore speeches as well. It will enlighten you about the Hindu festival.

Now, comes the 3rd set that inherits the important facts about the Ganesh Chaturthi. We hope you are liking the article, if you have any queries, feel free to write to us. Do share with your friends those who have participated in the competitions too.

Ganesh Chaturthi is an important Hindu festival in India. Lord Ganesha is welcome with his favorite bhog. Mangal Puja and Aarti in the morning and evening are sacred rituals. One gets Riddhi-Siddhi with gods grace. The preparations begin 15 days prior in societies and marques.

There are four main rituals of Ganesh Chaturthi:

2. Why is Ganesh submerged in water?

The 10-day cycle marks the birth cycle of Lord Ganesh and it is said that he was born with clay. Hence, submerging in water is a ritual.

3. Who started the Ganesh festival?

4. How many days Ganesh festival is celebrated?

[2020] Christmas Celebration In India | Wishes in Hindi and Malayalam