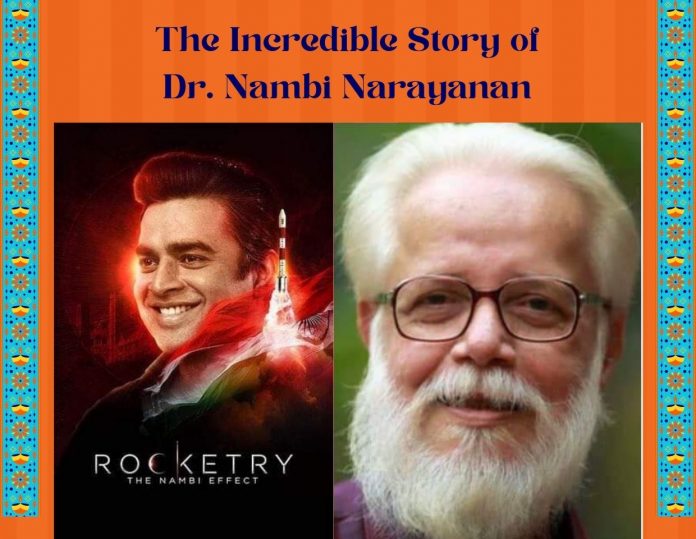 80-year-old ISRO scientist who is still waiting for justice after 18 police officials contrived the case in 1994.Dr. Nambi Narayanan came into the limelight due to R.Madhavan’s Rocketry. But who is he? What is his story? We all are desperate to know about him. So, let us know the Nambi Narayanan wiki.

Who is Nambi Narayanan?

S. Nambi Narayanan is an Indian aerospace engineer who worked in ISRO (Indian Space Research Organization). He contributed to the launch of Vikas Rocket Engine. He is a Padma Bhushan awardee in 2019. He acquired this technology from the French for the Vikas engine that was used in PSLV. He directed the division for cryogenics.

Nambi Narayanan was born in a Tamil family in Nagercoil (Travancore presently Kanyakumari district). He did his schooling in a local DVD Higher Secondary School. He did his B. Tech from Mechanical Engineering in Thiagarajar College of Engineering Madurai. He has two sisters and lost his father during his college days. As soon as father died mother got sick. Nambi is married to Meena Nambi and has two children. His son is a businessman, Shankar Narayanan, and his daughter, Geetha Arunan is a Montessori School Teacher in Bangalore. She is married to an ISRO scientist, Subbiah Arunan (Padma Shree Awardee), director of Mars Orbiter Mission.

ISRO scientist Nambi Narayanan has an incredible story to narrate to the world. You will get more information about him in the Nambi Narayanan autobiography book pdf. After studying mechanical engineering, he started his career in 1966 in ISRO as a technical assistant at Thumba Electrical Rocket Launching Station. He earned a NASA fellowship and went to Princeton University in 1969. He completed his master’s in chemical rocket propulsion under the guidance of professor Luigi Crocco. When he returned to India, he was an expert in liquid propulsion. At that time India still depends on solid propellants.

At, 100 man-years of ISRO, the Societe Europeene de Propulsion in 1974 bestowed India with Viking engine technology. The transfer was made by three teams and Narayanan was the in-charge of forty engineers who worked on the engine acquisition from French. The other two teams worked on indigenizing the hardware in India and establishing a base in Mahendragiri. Vikas, the first engine was tested successfully in 1985. The ISRO foundation internal reports highlighted Nambi’s work and organizational skills and also noted that he took all the credits by himself for his teamwork and that he runs a private business sideways. An inquiry was set by dropped in 1982. The senior commandant of the Central Industrial Security Force, Mr. R. B. Sreekumar led the unit posted at Vikram Sarabhai Space Center and investigated the case of Dr. Narayanan. He submitted a voluntary resignation in 1994, before police arrest. Later on 26 January 2016, he was awarded Padma Bhushan Award for the development of Vikas by the Government of India.

There are two books on S. Nambi Narayanan

What is Nambi Narayanan case?

On October 20, 1994, Mariam Rasheeda, a Maldivian woman was taken into custody by Kerala Special Branch. Her arrest turned into a massive tailing-related scandal. It was alleged that Mariam with seven people including scientists was involved in selling the secret rocket engine drawings to Pakistan. The arrest of Narayanan, director of the cryogenic project ISRO, deputy director D. Sasikumaran, Indian Representative of a Russian Space Agency, K. Chandrashekhar, S.K. Sharma, a labor contractor, and Fousiya Hassan were accused of spy racket. Later, in April 1996, CBI stated that it is a false case and there is no evidence against the accused. The court accepted the Central Bureau of Investigation closure report and everyone was discharged.

Actor, R. Madhavan is debuting in a movie named Rocketry: The Nambi Effect which is a biographical drama of the Nambi Narayanan story. The former scientist was acquitted in May 1996 by a CBI court. However, he is still battling the case against him as the Kerala government in 1996 ordered a re-investigation. Dr. Narayanan challenged and dragged this case to the Supreme court for another couple of years and subdued State Government for this. The honorable court provided Narayanan and others with a 1 Lakh rupees settlement and directed the state government to pay the compensating amount. In May 2018, Narayanan suffered a dent in his reputation and filed a case against seeking a plea from the former Kerala Director General of Police and other police officers. In September 2018, he got a compensation of 50Lakhs subject to mental cruelty against the false case of spy.

A new book by journalist J. Rajashekharan Nair, Classified: Hidden Truths of ISRO Spy Story, reveals the unanswered questions about the case. The Nambi Narayanan movie also portrays what such a dignified personality has gone through in his life due to a false allegation.

The spy story is still incomplete as compensation is not enough for such a grueling experience the ISRO scientist has gone through. As per charges by Nambi, the CBI probe began for the arrest of 18 cops involved in this case. Some are out on anticipatory bails and some are under CBI probe to know the larger conspiracy angle.

A paradox in CBI Investigation

Mr. Nair’s Book reveals the paradox going on in the CBI investigation. In 1994, the Kerala police along with Intelligence Bureau presented an espionage case of spy against ISRO as a defense organization about the selling of India’s cryogenic missile technology to Pakistan and painted two ISRO technocrats as Pakistani spies. ISRO is not a defense organization and there was no cryogenic technology in 1994 with ISRO.

After twenty-seven years of investigation, CBI is now stating that R. B. Sreekumar, one of the accused cops is the Inter-Services Intelligence Man. And the ISRO scientist’s involvement was vandalized by Pakistan.

Scant of Justice in Nambi’s Case

As per Nair, Narayanan’s life has been upside down due to the case. His future, dignity, and mental health have devastated his whole family. But there is much more to it. This case is of perjury, as per Nair’s Book.

We don’t know what is the truth behind? There is much more that lies beneath. What we know is that Dr. Nambi Narayanan is a strong-willed man who was dragged into a false case and is seeking justice for twenty-seven years. We can’t even imagine what he has gone through in his life. Was it fair? What is the other side of the story? Tell us what you think about the case, culprits, and justice. What we all know is- justice late is justice denied.

Photo Poses for Girls in Suit/Kurta – Photoshoot at Home

How to buy the Indian flag online through ePostOffice

Photo Poses for Girls in Jeans – Photoshoot at Home